Last night was the christening of my newly arrived tipi tent by Luxe, the Hexpeak V4a. (Seriously, it rained and all.)

I headed out in the dark to the site that has become my winter go-to – the back of the quarries… not a long walk and certainly over familiar terrain, but with a head torch and full moonlight it still takes 15 minutes.

The tent is dead simple to pitch -even in the dark. A pole and six pegs is all that’s needed on a calm night like tonight (luckily, since it didn’t come with guy lines. I’m planning to make some tomorrow while it’s pitched). I can’t understand why I’ve read so many complaints online about pitching problems with angles and inners: I did it perfectly. In the dark. And on a precipice too. 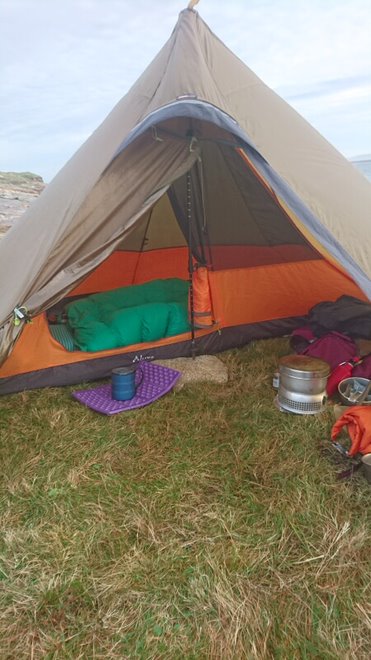 Tonight, darkness engulfed the land to the north of me, but to the south over the ocean the moon was a glowing spotlight reflecting sharply off the sea. A thin layer of blanket cloud lit up the surrounding sky and the occasional rain drop fell here and there. I was really happy to be back in nature, and such a spectacular night at that. A delicious dinner was cooked up on the Trangia – chorizo, mushroom and a packet of French-style lentils with a tea to wash it down. I sat at the entrance and watched the unchanging landscape and felt the cold breeze while I ate.

The gentle pitta-patta of rain on the fly was better than a Lullaby and I slept well. By the morning the cold wind had moved to the west and was blowing stronger, and straight in the door. A brief period of sunshine lured me out of bed only to disappear as soon as I emerged. I think it was watching me… Teasing me…

I slept really well. The gentle pitta-patta of rain on the fly was better than a Lullaby. By the morning the cold wind had moved to the west and was blowing stronger, and straight in the door. A brief period of sunshine lured me out of bed only to disappear as soon as I emerged. I think it was watching me… Teasing me… I cooked up scrambled eggs and drank a black coffee for breakfast (I don’t usually drink it black – there was nothing to carry any milk in – so I tried adding a little butter to it as an experiment. Wasn’t too bad in all honesty.).

I cooked up scrambled eggs and drank a black coffee for breakfast. (I don’t usually drink it black – there was nothing to carry any milk in – so I tried adding a little butter to it as an experiment. Wasn’t too bad in all honesty.) It’s the first morning out camping I’ve been able to sit back and relax enough to do the whole breakfast thing in a while. I’ve leant that in winter, its better to chose your days based on the next morning’ weather, rather than the evening. The Soto Helix 2p coffee maker with included filter papers sits on top of my GSI Insulated mug to make a fine brew that stays warm. Its the most lightweight, compact pour over device I could find and since I’m a recent pour-over convert I even use this set up at home and on day hikes… Love ’em.

Now to business. Seeing as my tent was second hand and didn’t come with guylines (my oversight), my project now was to create some from the length of 2mm x 15m dyneema I bought. Materials like dyneema are generally aimed at the ultralight market which I don’t generally follow, but I chose these for guylines. I had read that the rope and tensioners that come with Luxe tents slip quite easily, and because it’s windy here most of the time, I think it’s important to have reliable lines and tensioners. There’s enough rope to make 5, matching the tent requirements however from researching, two or three are enough. 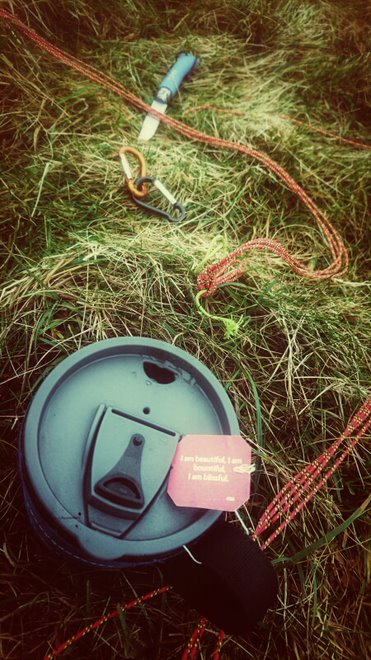 There was a good idea on YouTube/blog about attaching the guys with a carabiner to the tent. This way, they can be removed and positioned whenever and wherever you want. It also prevents tangling when packing but also sometimes (very occasionally) they just aren’t needed. Only thing thus far is that aluminum carabiners add a fair bit a weight (there I go again about the ultra lightweight). I bought Clamcleat glow in the dark tensioners but they haven’t arrived yet and I just used a slip knot. Maybe it’s just as good (and weighs less!) 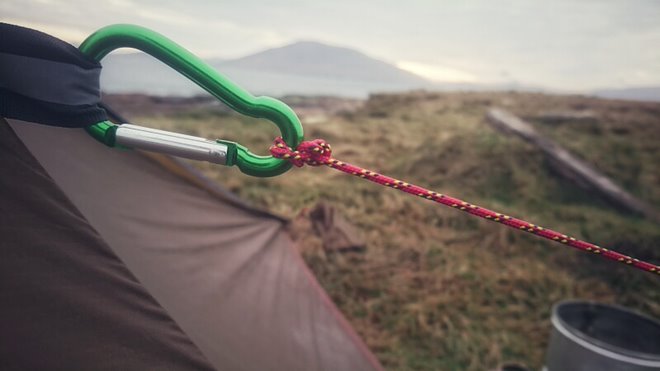 So I really enjoyed the Luxe Hexpeak a lot. It has fulfilled all my expectations. There is so much space for moving around inside and the colour is perfect for the bog. Literally the only gripe I have is the size of the footprint. It’s bigger than a two person tent! But with strategic planning this won’t be an issue, even on a mountainside. I’ve seen there is a way to pitch this as a pyramid shape, which may be investigated in future. But I also believe it will be possible to pitch this tent in places that I haven’t previously been able to, thanks to its excessively long pitching ropes. For example, long grass over heavy bog, where your tent pegs would be at risk of getting lost in the grass and never returning, or maybe even not long enough to hold in the ground… I’ll be able to use the long ropes to tie the pegs to, boldly burying them as deep as I can reach.

Other little tweaks that need to be done are freshening the fly up with Fabsil. There are lots of white bloton the fly which I expect happen from sun exposure, plus I’ll probably give the seams a seal. Now I really can’t wait to get out there again – wind or rain I don’t care!