The Bangor Trail, a relatively infamous bog trail in remote North Mayo, lived up to its reputation in nearly every way when I took the three day walk in mid September. No one seems to know exactly the length; Google searches report everything from 29km to 42km – although most likely to be 39km or 42km – but with the high degree of difficulty it feels much longer. There is also ambiguity regarding the starting location of the trail, which follows a 16th Century droving route through the bog from Letterkeen to Bangor Erris, but most people begin in the town of Newport 16km further. The trail presents very few inclines and declines, but due to the difficult nature of the terrain, allow more time than you would usually expect for the distance.

I began the trail in Bangor Erris and walked it in reverse, aiming for Newport. Nearly instantly the trail displayed the very thing it was reputed for: bog. Muddy, swampy, mossy bog, which gave no indication of the depth you might sink – anything from the sole of your shoe to your knee.

After a couple of hours, the second thing The Bangor Trail is famous for begins to emerge:

“Indeed the Nephin Beg range of mountains is I think the very loneliest place in this country, for the hills themselves are encircled by this vast area of trackless bog,”

Irish naturalist Robert Lloyd Praeger ‘The Way That I Went’ 1937

If you seek solitude, there is no other hike that will meet the isolation of The Bangor Trail. Online reviews are mixed in a struggle between those who loved the it and those who hated it. The isolation indeed vast and spectacular, with hardly a sheep for miles. There is very few signs of past occupation along the route – just three or four ruins scattered along the ancient route. Having a map is also an important item to carry with you: the trail markers are 1km apart, and not all easily visible even on a sunny day. While much of the trail is easy to follow, there were two times at river crossings that I became lost or unsure of which direction to take, and one section shows no sign of a road at all. 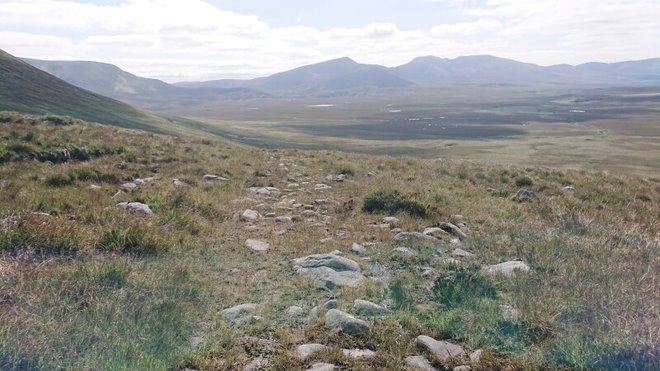 Very fortunately for me, the third thing the trail (and bog in general) is famous for, was not an issue in these few days: midges. Being surrounded in mountains usually means little wind to deter midges and with bog being their prime environment, they swarm so heavily that its impossible to breathe. In case of this situation I brought some spray and a hat to keep them off my face but thankfully the wind was strong enough to keep them at bay. Swarms of tiny vampires is no fun regardless of how prepared you are.

It was a nice discovery to see that recent investing has been made in this trail and two new bothies have been constructed along the route. This means there is no need to bring a tent when walking from Newport to Bangor Erris, with one situated 500m from the Letterkeen carpark and the other four hours/7km from Bangor Erris near the Tarsaughanmore River and suspension bridge. This one here is in Letterkeen and the very first time I stayed in a bothy, I really enjoyed it: 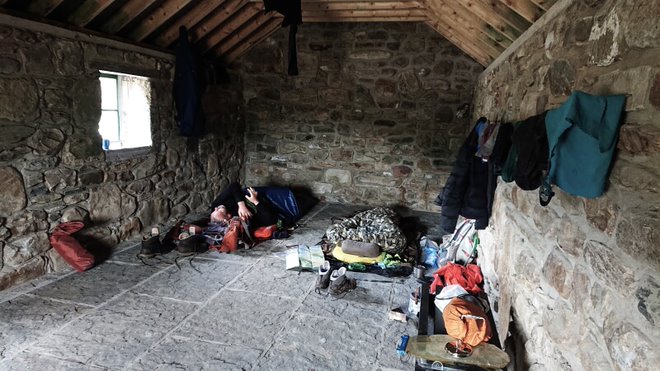 The trail dries up on the way to Newport and passes through high farmland with spectacular vistas over Lough Feeagh. The remaining walk is on back roads into Newport. I’m not a fan of road walking as it gives me sore feet, but arriving in Newport to a warm pub serving pork belly and pints of Smithwicks for lunch is an experience well worth the struggle!

After bog-bashing through 23km of raw terrain, the only reason I would want to repeat the experience is from the opposite direction. The few days I was on the trail were some of the driest in the year, with many rivers not even flowing at all, yet the bog somehow remained slushy as ever. Its is by far the wettest walk I’ve completed and to do it again I would almost want to take a lifejacket! I had knee high gaiters and Goretex boots so remained relatively dry, with the night time to freshen up socks, but I was still wet from repeatedly bogging myself up to the calves and sometimes knees on both the first two days. If any rain had fallen there would be no chance of drying anything at all in a tent. The trail would be very enjoyable if you went with the intention of getting wet – no waterproof protection other than a jacket and trousers – and just wear footwear to help reduce blisters. Perhaps I’ll make it part of the plan for next time!