The night was gusty and wet at the camp in Hrafntinnusker but the stone walls around my tent site really helped to reduce the force of the wind. The most unlucky thing about arriving early at the campsite to get a well pitched tent in a secure area is that people arriving late miss out on stone-walled protection and end up pitching right beside one of your walls, without good tents, to glean protection. I ended up listening to somebody else’s tent flapping horribly in the wind all night. Finally it stopped, thankfully but curiously, as the wind was still strong. In the morning I got up and saw the tent making all the noise was still there indeed, but without the rainfly! The poor guy in it didn’t look happy at all. Or in any way dry. 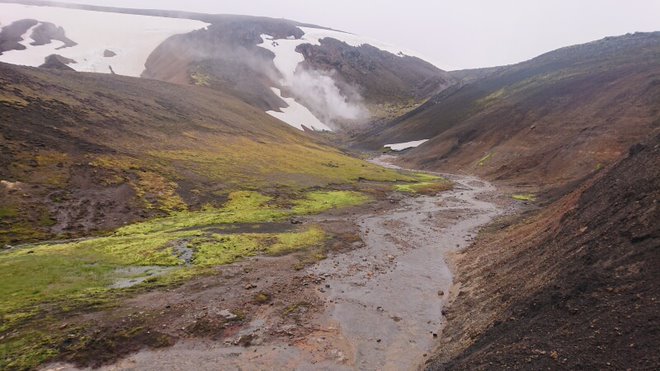 On a side note, I’ve invented a wonderful system of drying/freshening up clothes inside my tent with a spare piece if hiking pole and paracord (if only it hadn’t been so damp): 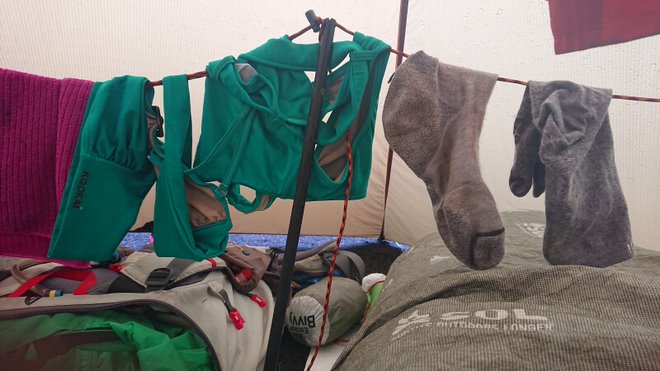 My walk to Afltnavatn began in a flurry as I was anxious to avoid a group of nearly 40 hikers who had plagued my day yesterday. I just didn’t appreciate how loud they talked or fast they walked. It didn’t make sense to me that they came all the way to Iceland to treat such a spectacular place with little attention. So I dashed off a half hour before them which turned out to be a mistake because they were pushing me along. After, I let them pass. The sky today was grey and the wind cold, although it had dried up overnight and was promising to improve as the day progressed.

The section today was absolutely awash with incredible vistas and iconic landscapes. After some wonderful varieties of terrain – snow, lava rock and rhyolite mountains – the plateau came to an end, but not before perhaps the most spectacular view over the remaining days’ hike: towards the hut in Alftnavatn by the lake, the view was filled with spectacular mountain tops amongst green valleys. It was also a surprise at this point to see a group of mountain bikers whizzing passed as I plodded along in the cold wind! 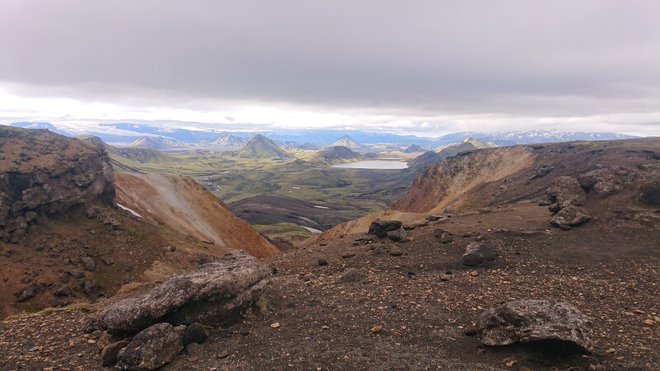 The descent was a long, very steep, fragile tip-toe-style down the side of a mountain. After passing a few hikers on the way up, I wondered briefly whether this mountain side was the reason they encouraged people to walk from north to south. A welcome river crossing waited at the bottom which freshened up my feet and then the trail entered an area featuring small rocks that resembled tasty-looking swiss cheese. Perhaps I was a little hungry. The waymarkers changed to white after the river crossing, which I thought meant the walk had finished its display of geothermals and moved on to snow and ice. 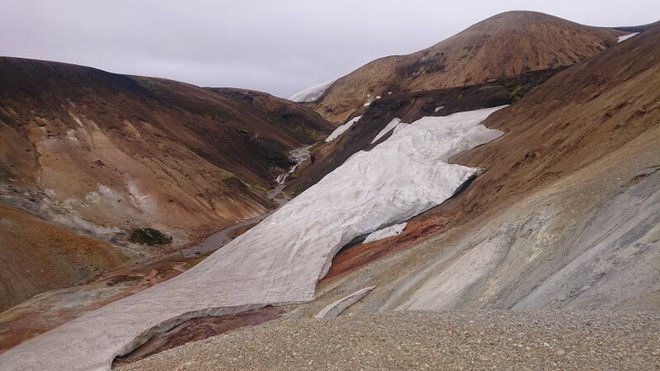 It was a relief to make camp in Alftnavatn, although there was also an option to walk an extra 5km to the next hut in Hvanngil which is smaller and mainly used as refuge when winds in Alftnavatn are too strong for camping. Tonight they were giving up to 15 metres per second, which they said was ok. During the night I loved the sound of the winds as they howled down the valley towards the tents, one slow big whoosh, like a giant sigh, one after the other. 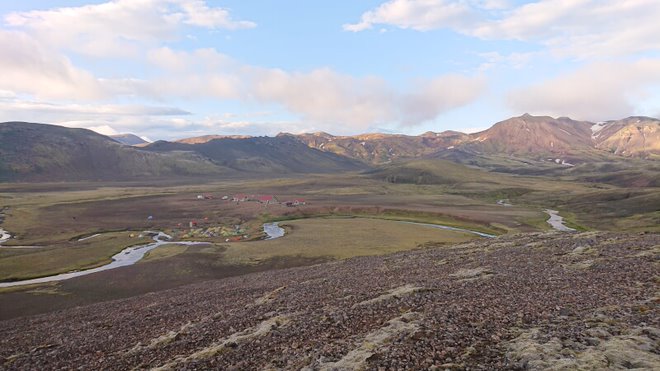 Many said that the campgrounds in Alftnavatn are the most scenic on the trail, and although beautiful, in the end I didn’t particularly agree or disagree; it was very busy in Alftnavatn and wished I’d gone the extra distance to Hvanngil which is closer to surrounding mountains. However, my camp beside the river was also very cosy and scenic:

It was a relief to see the sun this afternoon, after the cold wind all day (and dampness over the last few days) it was a welcome chance to dry out my socks, shoes and sleeping bag footbox. I took a new pair of Sealskinz waterproof socks to enhance my poorly performing Futurelight boots from The North Face. They dried out really fast in the sun!

About an hour after I left this morning there was a river to cross which I was thankful for because the sun was already hot. The terrain was now flat with slight inclines and declines and the trail weaved its way through the green valleys to the smaller hut in Hvanngil. One more river crossing marked the beginning of the geopark which travels through miles and miles of lava field, past incredible monoliths featuring grotesque juts and spikes formed by lava. The Mýrdalsjökull glacier is in the far distance surrounding the peak of the volcano Katla.

The lava fields are vast and empty of life. I began to find the lava crossing challenging after an hour or so, the scenery was slow to change and sparse feeling, and I was tired from the last few days with not enough sleep. I distracted myself with the thought of what it might have looked like here when the lave was flowing over the land, along with some Lakerol salty liquorice; something I’d missed since my last visit to Scandinavia 10 years ago. I totally recommend taking a couple of packets on your hike for times like this.

It was the packets of salty liquorice and my crocs that I loved the most. Crocs are river crossing shoes and camp shoes; they were absolutely worth the haul. A few people had them, but most had sandals or running shoes. The down side I thought of these, was that they are always going to be wet. My crocs dried out nicely and were ready for my feet at camp every evening. I also appreciated my sleeping bag protector: SOL Escape bivvy helped to protect my Rab Ascent 900 as the inside of my tipi tent regularly went through modes of makeshift kitchen, bathing and sauna room, bathroom, rain shelter and bedroom. I could throw my sleeping bag out of the way with this protector and not have to worry about it being dirtied or dampened. 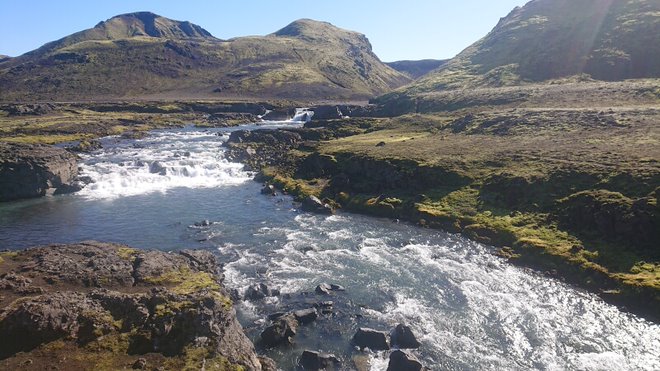 The camping grounds at Emstrur (also called Botnar) were situated in and around a valley, something to explore to find a little hidden gem to put your tent. By far the camp at Emstrur was my favourite because I was completely alone. Mine was the furthest site from the huts and amenities: Just what I wanted – the night before I felt claustrophobic with all the tents around me. It was only then I became less distracted by everyone around, and I could begin to connect better with nature. One of those ways was drawing fresh water from the rivers nearby.

Day four, the final day, I’d figured out how to completely avoid the big groups and nearly everyone else hiking the Laugavegur Trail in general. I departed camp at 11am, the second last party to leave on the 16km final leg. 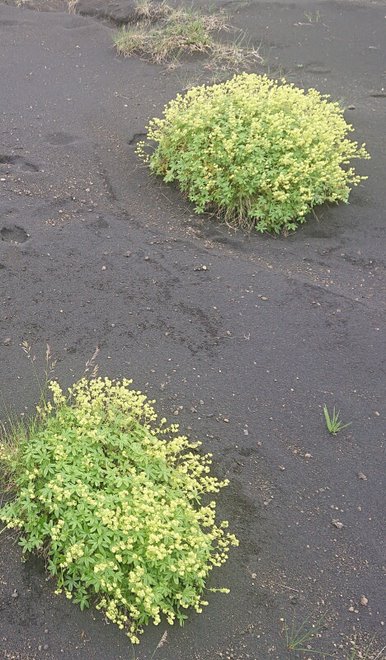 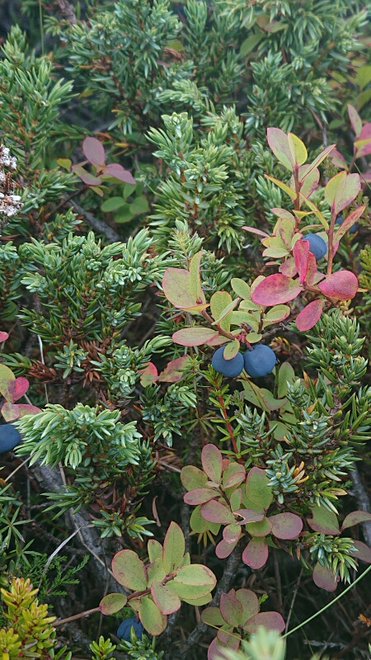 The trail was easy again today, passing through completely new varieties of scenery. Huge canyons cut from thousands of years of glacial activity in the area carried torrents of water towards the sea. Lovely soft black volcanic sand

featured underfoot along with many new signs of life nearby – birds, berries, bushes and mushrooms. I stopped on occasion to eat some blueberries and crowberries, plus I enjoyed a lunch break of two-minute noodles!

The landscape has changed so much and the trail markers are now indicated in blue, resembling the sky. There are no signs anywhere of geysers or rolling brown mountains: now I’m surrounded with harsh, jagged mountains covered in green moss for miles and miles. Its a cold, uninviting hostile place. It even seems the rivers have cut trenches especially to hide from the ominous mountains on their journey through the valley. Yet this is where the wildlife can survive and it is also spectacular in its own way.

Before the trail enters into an area of reclaimed farm land full of native trees, mostly birch, the final river crossing must be conquered. This river can sometimes be up to hip height, and very fast flowing. Fortunately today, with the little amount of rain fall recently, the water was only just below knee height, although still very fast flowing in deeper areas. The crossing for me was a little scary because it was easy to lose balance looking down at the speed of the water. I was really thankful for my hiking poles.

I loved, loved, loved the location of the hut I chose to stay at in Porsmork. Rivers, mountains, beer sum up perfectly my brief stay at Langidalur hut. Right on the bank of the Krossa river it felt wedged in between a narrow valley. Just further down stream is the site of the 2010 volcano eruption of Eyjafjallajokull, and its still possible to see volcanic ash on the snow. 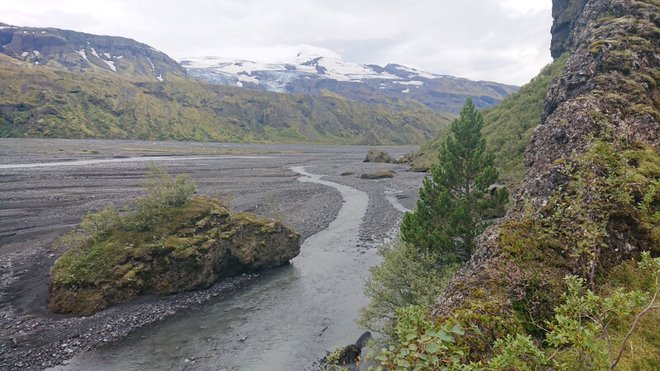 In the last few kilometres of the Laugavegur Trail I thought maybe I’d have an anti-enthusiasm pop up out of nowhere about not wanting to complete the walk after my long, careful preparation, and I’d slow to a snail pace; or maybe I’d be racing out of adrenalin to make the claim I’d finished it; maybe even rush along thoughtlessly for the sake of my feet and legs. Truth be told, I actually didn’t feel strongly about any of these. After four days of walking – the longest I’d ever walked – I just realised I’ve found a new appreciation for my actions in the present, with no reason to be concerned over the future. I just need to walk. So that’s what I did. 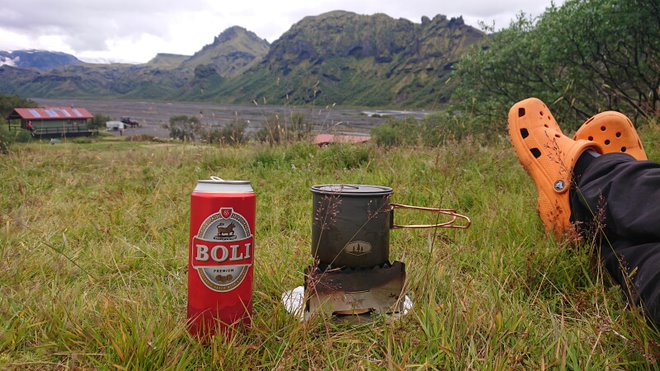 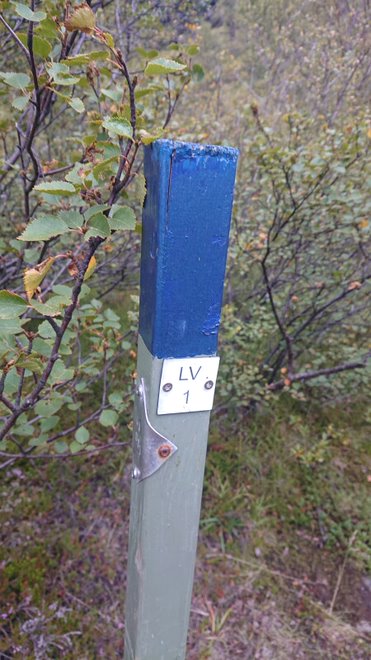